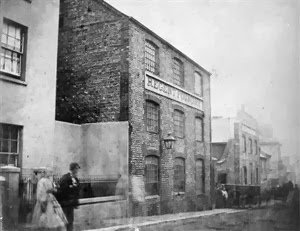 A visit to the most excellent Foundry pub in Foundry Street, Brighton last night prompted me to find out more about the Regent Foundry. It was located on the spot now occupied by the Royal Mail sorting office.

The North Laine Community Association website has this potted history:


The area behind the western side of [Foundry] street, where the post office now stands, was once dominated by the Regent Iron Foundry, the town's largest employer for much of the 19th century. The foundry opened in Regent Street and moved to Foundry Street in 1823, possibly for the larger premises it needed, for it was then making much of the ironwork needed by the Chain Pier, being built at the time. The foundry continued to make cast iron products for the town until it eventually closed in 1912. The building was demolished in 1921 and the Post Office was built on the site in the mid 1930s.

and an interesting account of an early tour of the Foundry.

At the time, the North Laine was the industrial heartland of Brighton. The Regent Foundry made the iron for the Chain Pier, the predecessor to the Palace Pier, as well as lots of other products like coal hole covers, although for some reason they weren't stamped with the 'Regent' name. According to the NLCA, Palmer covers were made there.
Posted by Andrew Coleman at 23:26